After a long spell of rain we had an unusual spell of cold which was 3-5 C below normal. Although I refused to bring out my "winter wear" it was nice to loaf around in the sun.

All the activity was around Main Street, now losing its identity as MG road except that MG Road in all Indian cities (and they each have their own MG road ... I have a suspicion that you wont find your way to the road if ask for Mahatma Gandhi Road)all used to be the Main street. They still have the East Street and the West Streets which are east and west of the main street. I suppose you cant call them east mahatma and west mahatma roads. There must have been a political problem to call them Nehru street and Patel street because one may not know who was easter of the two and who a waster.

The Christmas spirit was every where with as much commercial jest as anywhere in the world and as much as a non-Christian community could allow. It is always more important in the camp area. Red Santa caps are a must buy. This year they give sometimes along with the cap a proper European coloured Santa face. They also give spiderman, and phantom and tiger faces to please children of all interests I guess. The bakers shop (on West street) are stacked with what they think are appropriate Christmas goodies. A dalit christian board makes the most sense for the season. 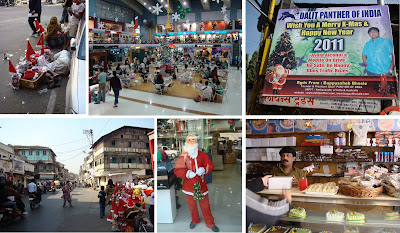 A white dog could have been a reindeer in the snow and diwali decorations find dual use as stars of Bethelhem.

So... why not? ... have a merry christmas... who cares what faith one belongs to in the old Industan even if it did not include kaveri-sthan or narmada-sthan or ganga-sthan.

When one walks down main street from the ABC farm end one often sees people outside a window praying rather seriously and without any of the ostentation or without even a priest. If you peek through the window it is not very clear since it is rather dark. However, with the digital camera things brighten up and are brought closer. So this time I saw with the digital eye. It was an image of skanda or karthika or murugan similar to what I had seen earlier and speculated upon as marking a corner stone of a settlement (see my blog "Gnostic Embrace of Warkaris in the Monsoon Season around Pune: II Khandoba Mandir (Warwadi) and the mystery of a Stone Pillar" Fig 11). So, I guess this temple was an ancient stone-worship center that has grown in size but not lost out on true faith and devotion because of that.

There is no possibility of a white Christmas as yet in Pune but many of the animals that I photographed could once have been snow-white in colour. A calf in front of a temple had its mouth muzzled for some reason ... it probably ate the cars nearby or temple flowers given for worship ... a horse had its food tied to its mouth and not given any other option for eating ... a dog seemed to ask me where Bruno was... a black Christmas ram was caged and butted violently within the case against my camera preferring to remain unidentified, perhaps. 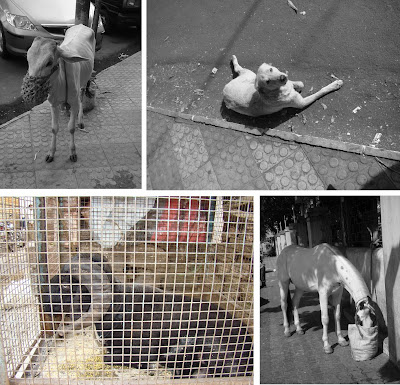 One end (south?) of the MG road still has the older camp quality in the sense that old building remain and the cobbler shops were there. The beginning of the south end of the road is marked by what must have been a grand building. Somebody said of Bombay, long before it became Mumbai, that Bombay had stately old buildings bandaged by the daily wash. The building at the end of MG road was one such. As old buildings adapt to newer life styles, they usually add more floors so that the upper floors are of a later style than the lower ones. The building on MG road all have some modern shops at the ground level so that when walking down MG road now you have upper floors that have the older style and the bottom floor is ultra modern.

One such magnificent building, almost fully bandaged by the laundry, shown below (click to expand you must), always tempts me to go in and talk to ghosts and relatives. What a story must be lurking there! One wonders what a chair doing up on the top left hand corner is doing (click to expand) in the top right picture! 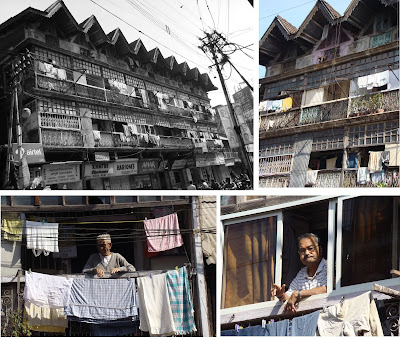 Just before one enters the proper Main Street (MGRd)one goes past a bakery (that to the old "camp"ers makes the best cakes) and a cobbler's shop manned by cobblers from Bihar who have been there perhaps for a century and where many discerning people (including myself because my left foot is UK size 11 and my right foot is size 10) get their shoes hand-made and ever lasting. Just after that is a house with the most renarkably finished brickwork (see pictures below; click on picture to expand) I have seen in Pune. There is a machine shop at the ground level called the Delhi Machine Shop, Pune (House number 205 on MG road). It is adjacent to a medical shop. The owner of this medicine shop own the house. She says that the house is 150 years old and was built by her mother-in-law's mother's mother-in-law's mother. That's quite a great great mother-in-law story. It rests on wooden pillars and the wooden work on the front of the house is from that time. There is no house in Poona to match the house, and I quite believe her. Somewhere on west street is a similar brick-worked house which seems to be more dilapidated (bottom picture bottom right). 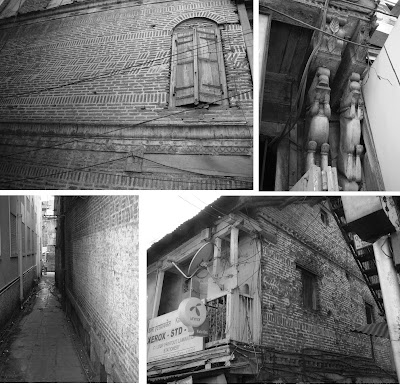 The day was a nice day where all the old familiar Pune places looked more familiar and better. The sky was a clear blue and the sun caressed the walls without a glare.

There are many nice buildings on main street around (see pictures immediately below). I dont really know what is the Indo-Portugese style. I read somewhere that this style influenced European architecture. Some of the buildings remind me of buildings in Trieste (one on left below)... I dont know if the Indian part is the Nritish colonial part.... It could also be the old wada style.

One of the very strong impressions of Main street is, if one is not busy window-shopping, the quality of the grill work some of which are shown below. 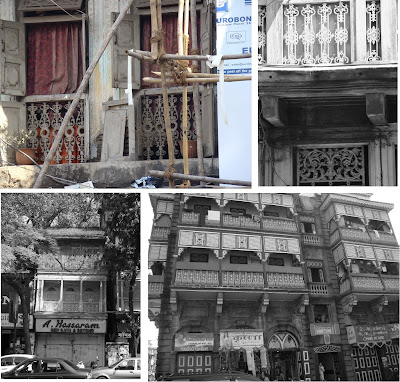 There is also some out-standing (at least by my standards) plaster-of-paris work that is European if not colonial in style. This work known to have been used well in the temples around Pune.

The grill-work and the old colonial style is struggling to survive. It is perhaps fortunate that business is so good on Main Street that they prefer to keep the shops on the ground floor going without worrying what happens to the floors above.

It is easy to imagine that not too long ago,say about eighty years or so ago, main street was still mainly for the British army personnel... the officers lived further away... main street would have been only for shopping. The rest of the "natives", the barbers, the cooks, the gardeners or malis, the babus and the clerks lived around main street in their own open style. So there are small lanes leading out of the main street, but not to any well organized living areas. It was as if this main street was attached to a village or villages. This gives "camp" a gaon- or village-like appearance. There are so many intriguing lanes leading out of Main street (see pictures below) 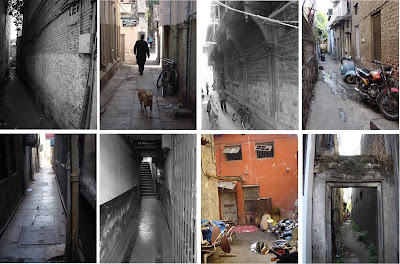 A place that we usually visit for lunch is the Badshah restaurant opposite the old Victory theatre (see left picture below). The other place where we stop for coffee if we have the money is Barrista which is located at a corner and offers interesting views. The container on the cart seemed to be an antique beauty (picture in the middle below).

Most of the times Barrista is filled by young people trying to convince their clients about whatever, if they are not whiling away time wastingly (as my son says). Sometimes there are young people who seem to be artistically inclined ... very rarely. This time I saw an young man who seemed to be an artist sketching something. So I asked him and he said he is a cartoonist. To cut things short this cartoonist is ananth gupta (not a bengali... from UP) ... he learnt from Mario Miranda and followed his style. He allowed us to see his book and photograph it. I have chosen two. One of them for the way he used Escher and the other for the way he used his philosophy. I dont know if Mario Miranda was that deep.

In the meanwhile the impact of the younger generation continues to grow. A study on chimpanzees nearly forty years ago had shown that if a mother is completely away from a baby, then when the baby becomes a mother it does not know anything about bringing up babies and treats her baby as something like an unwanted toy. The frightening feature is that it takes one generation to forget one's roots. The children are like those anywhere else in the world, I guess. Around Main Street, the fashion is to be western. Around west street, where we get into the area of small Indian businessmen, the styles are more Indian (picture below: top row centre, bottom row right). Main street is where the east ignores the east. 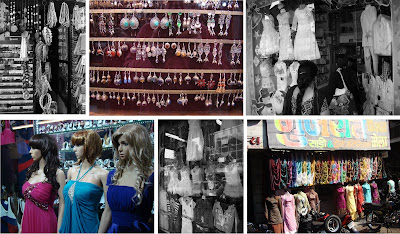 Life along west street is far removed from that on Main street. People know each other on the street. They sit outside their homes and wait to chat with passers by and neighbours. One such man is on the left in the picture below. He worked in the post office for forty two years and built himself the house on west street outside which he sits. His upper teeth are firm. He is eighty two now. He laments that he lost all his lower teeth because he chewed tobacco. He is sprightly and healthy.

On west street there is a Husseini Bakery which was started in 1932. Its not too long a time for a bakery. But by Indian standards it is impressive. What is most impressive is that over the last 80 years or so the front of the shop has undergone little change. If one enters the shop, as I was invited to, one meets an extremely fair, European looking man who is extremely courteous. He tells me about his shop and shows me pictures testifying to the age of the shop. He has just shaved his beard. He had a beard longer than the man behind him (bottom right picture). I buy brun and an Iranian bread. He poses for the photographs. My day is complete. After all the travels through time in this month of Christmas I got my daily bread from Husseiny bakery in the camp of endless time in the yuletide spirit (it must be a good spirit).

I have finished the blog in a hurry to post it tonight.

Merry Christmas once again.
Posted by Keshto at 7:20 PM

Very Well written !!!
Happy Christmas to you too , and a very very happy new year !!

Also find Pet Shops in Pune.
One stop online pet shop for everything your pet needs.