Very often one is influenced by favourable images that could make one long to be on the scene. One of these is the image of a bakery and the scent of fresh bread wafting in the environment. The early morning scene when the bakery opens in the movie "As Good as it Gets" is one such scene simply because there is always something romantic in catching your favourite bakery when it opens. In India it could be a Tiffin room, such as Vaishalis in Pune or MT tiffin room in Bangalore. The whiff of freshly baked food from bakeries in Pune is perhaps more closely associated with the baking of (what are called) "Patties" although they are very different from the patties that are placed in hamburgers (see Wikipedia). What we call patties in India is perhaps similar to what are called turnovers in which a filling is placed in dough (usually layered) turned over and sealed. The Kharagpur shingaras is another unique gourmet specialty which is probably of the turnover variety. Hot milk and jalebi on a misty winter morning (say, in IIT Kanpur sitting with the newspaper vendors and maalis and sweepers) is definitely another memory for morning food in India that certainly does not involve a bakery.

The bakeries I know which send an appetite-whipping aroma over its neighbourhood are the Santosh Bakery (Apte Road), Shree Samartha Sweets Snacks (Sinhagad Road),Just Baked Bakery (Dhole Patil Road) or the Kayani Bakery (East Street). None of them have people lining up outside their shop for their bread.

The only people who wait for the sounds of the morning bread seem to be those living in dwellings meant for construction workers. In the morning the salesmen from the nearby bakeries will be carrying their baked products and making noises with classic bicyc;e horns, thereby signalling their presence. Theire more popular item is the brun bread, a sort of crusty bun, which tastes like the french baguette and are usually made by wood-burnt furnaces because of the requirement of steam during baking for forming the crusty bread. This bread, we found, goes very well with cheese and wine. The brun became popular in Mumbai and Pune because of the Iranian restaurants. The partaking of brun with thick dollops of butter spread on it and dipped into thick sweet milked tea (chai) is the way the Iranians taught Mumbai and Pune to begin their day with.

A description (http://heritageinstitute.com/zoroastrianism/irani/cafe.htm) of life in the Iranian restaurants would go like this:-
"Bun-maska is a bread bun (called ladi paun/pav) served with a liberal helping of butter (maska). Chai is tea - strong and brewed in boiling milk (or even sweet condensed milk). Both tea and bread are served fresh, the bread being freshly baked several times a day. Patrons sometimes dip a piece of buttered bun in their tea before placing the morsel in their mouth. With this practice, a thick oily layer of butter soon floats on top of the tea - something resembling an oil slick on the ocean. The more uppity Zoroastrians condemn the practice as being uncouth and that which tanga-wallas (horse-cart drivers) use. But this writer found great joy in the plebeian practice despite his mother's admonishments. In his household, the bun was often substituted with gutli / brun paun (paun, or pao / pav, meaning bread in Gujarati).

Brun paun has a much harder crust than bun paun - so dry that unless cut correctly, the crust shatters and scatters all over the table. A buttered slice of brun paun holds up better than bun-maska (maska=butter) when dipped into the cup of steaming tea. With brun, bun-maska-chai becomes brun-maska-chai - and for this writer, a more authentic version of the Irani tradition, but one that is (and please forgive this) not everyone's cup of tea."

Another discussion on the brun-bread lif is a description (http://mumbai.metromela.com/Brun+pav+at+City+Bakery/article/3396) of the city bakery in Mumbai. Such restaurants also served masala bread and other flavoured breads which better appeal to the India or desi palate than the very proper Western-styled breads.

This blog is about making a more traditional bread, that are usually meant for health-conscious people of western inclinations. They have been told that multi-grain breads are good for their health and they would like it to be so. So recipes for whole grain breads are the rage, especially for the recently anglicised, successful Indian of the erstwhile properly Indianised, so far marginalised, very middle middle class.

I have not had much success in making this bread the way I imagine it should be made. Personally my famoily is against taking bread as something they should have breakfast with. There is also little conviction in arguments regarding the healthiness of such foods when one knows that the chappathis, and fulkas and idlis and uppamas and pongals are so much easier to make and substantially so much tastier to eat when accompanied by all those curries with all their spices and ingredients. In Maharashtra we have integrated the simple taste-less bun or pav made from the supposedly very unhealthy maida (white wheat) with the very spicy misal with a very spicy gravy ( called sample for some reason), or as pav-bhaji or as the very ubiquitous vada-pav. A true Maharashtrian is judged by the speed with which he gets his first vada-pav when he returns home from some other state.

Still ... there is this multi-grain bread to be made which has to compete in taste with the local allotropes of pav. One is truly handicapped to begin with.

I had been trying to make whole-wheat and multi-grain bread for some time and I have been reasonably unsuccessful most of the time. Last week I had been to Bangalore and sspent a day or two with my co-out-law Sangeeta (my brother-in-law's wife). She had made a multigrain bread, which was soft, and well-behaved in taste, and comparable in looks to any multi-grain bread available on the shelf anywhere in the world. She attributed her success to the dry yeast she had sourced from Thailand. She had not obtained good results with the Indian yeast (wet or dry) that as available in Bangalore.

Our earliest source of fresh yeast in Pune was from Chandans supermarket on MG Road at the corner where ABC Farms outlet was located. Later I begged the local bakery for bits of fresh yeast from packets they had stored in the refrigerator in bakeries in Pashan, which they sold to me at extortionist rates depending on their whim and my need. Later I realized that the yeast is available off the shelf at Dorabjees. I keep it in deep freeze and it is good forever.

On return to Pune, I had to check out the performance of the "fresh" yeast as compared to Sangeeta's "imported" yeast. This blog is about the bread that I made on return.

The success of a bread, I realize is the wayyou coax it to rise and form rather than the way you bully the dough into submission and command it to rise and perform. Sangeetha must be having those persuasive powers par excellence. Anyway, this is what I did.

Recipe for a Multigrain Bread

water (one cup). Parts of this water was used at various stages of the preparation. I sometimes make cheese at home. The whey after the cheese was made could be used instead of water.

a pickle of choice. In this case I used a salt pickle made by soaking wild Indian gooseberries, see picture below. The seeds were removed and the amla cut into 5mm or so pieces. It could be pedatha's chilly-hot gongoorra (Rozelle) chatney (see "Cooking at Home with Pedatha" (Best Vegetarian Book in the World - Gourmand Winner) also. 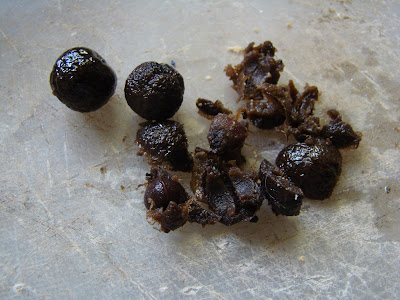 The Yeast.
Little chunks of the frozen yeast was taken in a small cup (Fig 1 left cup is roughly 3* dia, to give an idea of the yeast used; maybe a little excessive). Water to roughly fill the cup was added to the yeast. In another bowl a tablespppn or two of water was take, sugar added and dissolved with a little heating. The maida was added to this solution quickly stirred. The yeast with water was then added and stirred (middle of Fig 1). It was set aside when a frothy dough was formed witha near tripling of the volume (Fig 1 right).

The Dough
The flour ingredients were mized with the spice seeds and chilli, mustard oil, salt dissolved in water, the pickles.
They were mixed by hand thoroughly.
the remining water was added in three or four stages kneading the dough all the time. The technique I used is very different from that usually in the web (http://www.youtube.com/watch?v=dWj8oHMPFm0) or in the bible for bread baking, Edward Espe Brown's the Tassajara : Bread Book (1970 edition, presented to us as a wedding gift by David, which we could have read earlier, had it not been a bible). The dough was not soft with a plastic flow like a loose mudbefore kneading. Actually with kneading the dough became softer. I kneaded the dough in a bowl, pressing it down, then rolling it over truning it and then pressing it down again for about thirty minutes. It was rolled in to a ball on a board (left of Fig 2) and then allowed to rise for an hour when it nearly doubled in size (right of Fig 2). One usually recommends wetting the dough lightly from outside and covering it with a cling wrap to prevent the outside from becoming too dry. I just covered the bowl with a plate.

The proof of a dough is supposed to lie in the way it springs back when pressed. A video of what happens when I do so is shown in the video below. It did not rise back fully. This was about the best rise-back that I got.

the sides of the baking tin was lined with mustard oil. The dough was kneaded again for another 20-30 minutes. Rolled on a board till it was nearly smooth outside. This is the tricky part. I really get the bread to be seamless before baking. The results are better if I add water but then the baking schedule becomes very demanding,sometimes collapsing after rising leaving gaping holes inside. One has also to know at what temperature of the oven to put the bread inside and whether to cover it with an aluminum foil. I did not use any foil.

I allowed the dough to rise in the baking tin for 40 minutes The dough had become dry and the folds were not smoothened out. On rising these fold increased in size. I thought it gave it a rustic look. The amaranth seeds, red-chillies and other grains popped their heads out. The dough had nearly doubled in size befor placing in oven. It collapsed a bit after baking (Fig 3 top right). It slipped out easily from the tray (Fig 3 bottom left) and sliced well (Fig 3 bottom right). 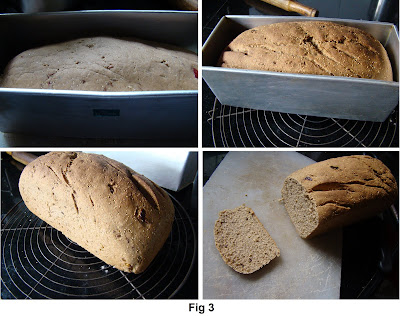 Later in the evening we had the bread making a baked crostina rustica with ginger and garlic pickle, sun-dreid tomatoes, and mushrooms, and parmesan slices along with a green salad. We also had it with a home-made cheese and red wine.

The spice seeds crackeld in the mouth, the bread was deemed a success, by Bella my french bull dog although she would have preferred it with Camembert.
Posted by Keshto at 7:05 AM No comments: