Thought of Food 8: Maska-da-golla in honey and molasses

The temptation to use paneer made from paneer phool continues.I have made cheese packets and they have aged well although I have not succeeded in introducing the deliciously rotten flavours of a Camembert or Brie nor have I introduced the penicillytus mold to make blue cheese. That is for another food-blog.

I had always thought that the paneer made by the traditional method of using the vegetarian rennet (see previou sblog) from paneer pool must have been the way they made milk-based sweets in the early days before Hekataios and Herodotos named the land of the Indus as India. It seems that the Greeks heard of India from the Persians. The Greeks could not pronounce "h" and had no proper "u". So instead of referring to India as the Vedic Sapta Sindhavah, the as the land of seven rivers in English, they referred to it as Hapta Hendvah (from http://ssubbanna.sulekha.com/blog/post/2007/05/greeks-in-india-before-alexander.htm). We would have all been Sindhis if the Greeks had heard about us directly from us.

What I meant from this unnecessary diversion is that "paneer phool" must have been known for making "paneer" even before we became Indos to the Greeks. The paneer that we get from cow's milk using this vegetarian rennet is very soft and may be spread easily even after sqeezing out the whey. It greases the palm very well. It may have been used for the local phrase, maska lagao which is the english equivalent of "buttering up". Everybody likes a little bit of maska, As they say "... maska toh bhagwaan ko bhi achha lagta hai ..." (ev god would like a little bit of maska). I have a suspicion that the Italian mascarpone that is used in tiramisu comes form the word maska since mascarpone is said to be derived from mascarpia a close relative to ricolta.

I thought that the first milk-based sweet that could be made and that would taste very different from what one gets in the market would be the very Bengali roshogolla which in Bengali would mean balls of juice. That is indeed exciting! That is what I thought it would be when I first heard of it at an age when I had begun to understand bengali. I took the meaning literally. It turned out to be balls of chhana (bengali for paneer) soaked in a hot watery syrup. In them days around independence, roshogolla was always taken fresh and hot from the local vendor around the corner. The syrup was not thick, and a proper bhadrolok (gentleman) gourmet would squeeze out the juice and have the rashogolla in one gulp, Three or four of such roshogollas would have been finished in one sitting of a few seconds. It was supposed to be good for the health. There was no diabetes mellitus at that time.

So I decided to use the paneer using paneer phool for making the roshogolla. The previous experience of making the roshogolla was with my mother (who else?). She would split the milk with lemon juice when the milk was hot. Then she would strain it with a cloth, and squeeze the whey out in a cloth first and then let the cloth with the chhana hang for some time. After hanging for some time (the next morning) she would sit and knead the chhana with the palm of her hand for about half an hour or so. She said that that was the secret of making good roshogolla. Then she woul roll it up into little balls and place them in a dilute boiling sugar solution for some time. We knew the roshogolla was done when there were no more left in the boiling sugar syrup! We had finished them off!

Later on, when we (Lalitha and I) tried to make the roshogolla the balls (golla) would disintegrate quickly and so we gave up making the sweet. When in Europe we had more success with the European milk. We could neer set curds with that milk the way we could in India. Milk products depend on the cow and the food they eat.

As if the cows did not know that!

I started with the paneer that I had made in the sual way, strained it a bit, and since I was not sure I did not squeeze the whey out hard enough. The paneer stuck to my palm while I was rolling them out. I could form abouta dozen balls of about 2 cm dia each (Figure below left; always click on picture to expand). The balls looked a little grainy.

The next step was to make the sugar syrup. Instead of sugar syrup, I tried a mixture of honey and molasses. Honey has been in use in India since vedic (which really means we don't know since when, but long long ago even before what is now Israel was known as the land of milk and honey) times. After all if India -- as we are told --- used to be a land of milk and honey then our sweets should have been made from honey, n'est ce pas?. The gur (organic molasses) was used to cut down the cost mainly. I took equal amounts of water and the hone-molasses mixture stirred it till I gort a clearish soultion.. boiled it and then threw the paneer balls in the honey-gur syrup. I let it come to a boil (Fig below middle), and gently turned them over and kept boiling for another ten minutes or so till I thought that the intended roshogollas could not take it any more (Figure below, right). I allowed for it to cool somewhat and then tasted it. The honey-gur syrup tasted fabulous, so did the "roshogolla" or what remained of it.

My wife suggested that one could take it as a dressing for a dish of fruits, or chilled gateaux. But it wont be recognised as a roshogolla even with sympathy and tolerance. They were certainly not "balls of juice" as I wanted them to be.

So ... I had to try again.
This time I squeezed out the whey by tying it in a muslin cloth (Figure below, left)(the muslin cloth made in Dhaka, Bangladesh, the jamdani variety of which was so fine that a sari could be pulled through a ring or "a 50-metre long muslin could be squeezed into a matchbox" --- from Kolkata Calling, posted by Rakhi Chakrabarti; the British cut the thumb of the Dhaka muslin weavers in order to destroy this cloth industry of Bengal for the benefit of the British mills, or so I was told by my mother).

All raditions have to be followed if you are making a traditional item. I let the paneer hang overnight. The paneer seemed reasonably dry when I removed the cloth. When I tried to press out the chhana as my mother didm I found it to be too buttery. I now realized that what I had got (Fig below, middle) could be the maska that gave the name to the Italian mascarpone. I rolled them into little balls, which looked more robust.

I dipped the chhana balls into a hot honey-gur syrup as before. Only this time I did not subjet the balls to a vigorous boiling as I did earlier. I let it rest and cool for some time. The gollas (balls) did not disintegrate as much.

When I tasted them, the balls were not at all spongy like the commercial roshogollas nor were they like the rasogollas from Assam (which tasted like the hot roshogollas of my childhood. 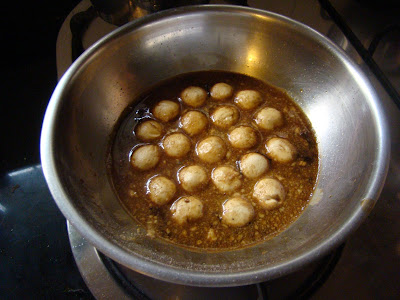 The taste was entirely different. The Punjabis would have called them Maska-da-golla if they had tasted what Ihad made, I suppose.
I thought it did not turn out that well. I would have converted all of them into a sweet cheese. But Lalitha, my wife, firmly disagreed. It tastes fine as it is. I like the ay it melts in your mouth like a juice ball.

After this blog was completed I went to Aroona Reejhsinghani's cook book ("Delicious Bengali Dishes" of 1975 (see my previous blog). The sugar syrup she made had 2:1 one sugar:water which was boiled to "one thread consistency". After bringing the syrup to a aoil she adds roughly 5% more cold ater before putting the chhana balls in. The crucial part could be that she adds one tea spoon of maida (refined wheat flour) to the syrup at this time. I think the purpose of this is to coat the chhana balls with a maida coating that prevents it from disintegrating. This could be clever chemistry. We purists of course avoid maida! The syrup was then boiled again for another five minutes and cold water added again. After five more minutes of boiling the chhana boils start swelling. It was then removed from the fire and kept overnight. The roshogollas last for a few days.

I like the idea of a honey-gur syrup base. After all there would have no sugar if we had stuck to honey and knew better the impact of the story of the birds and bees than the satisfaction one gets from acts that serves sometimes to extend one's lineage. Besides, honey has a long shelf-life. Moreover honey pobably dates back to earlier than paneer phool times.

That is another chicken and egg problem: We don't know which came first, the honey or the milk?
Posted by Keshto at 1:30 AM No comments: